What Is A Google Algorithm, And Why Does It Matter To You?

When you enter a query into Google and the search button is hit, Google provides you with a Search Engine Results Page (SERP). The rank or order of these websites is determined by Google's underlying algorithm. What is this algorithm and how does it work? Read on to find out more...

How Does Google's Algorithm Work?

In basic terms, the algorithm is a formula written by Google's engineers to help them understand exactly what a user is searching for and to then deliver the best search results for that query. For any one query there will be thousands, if not more, websites with possible relevant information. The algorithm makes it possible to sieve through this mass of information and enables Google to make a reasonable guess as to what you are actually searching for. It then ranks the websites by relevance to your query and returns them to you in the form of a Search Engine Results Page.

We entered the following query into Google search; 'Easter 2015', the results listed showed: 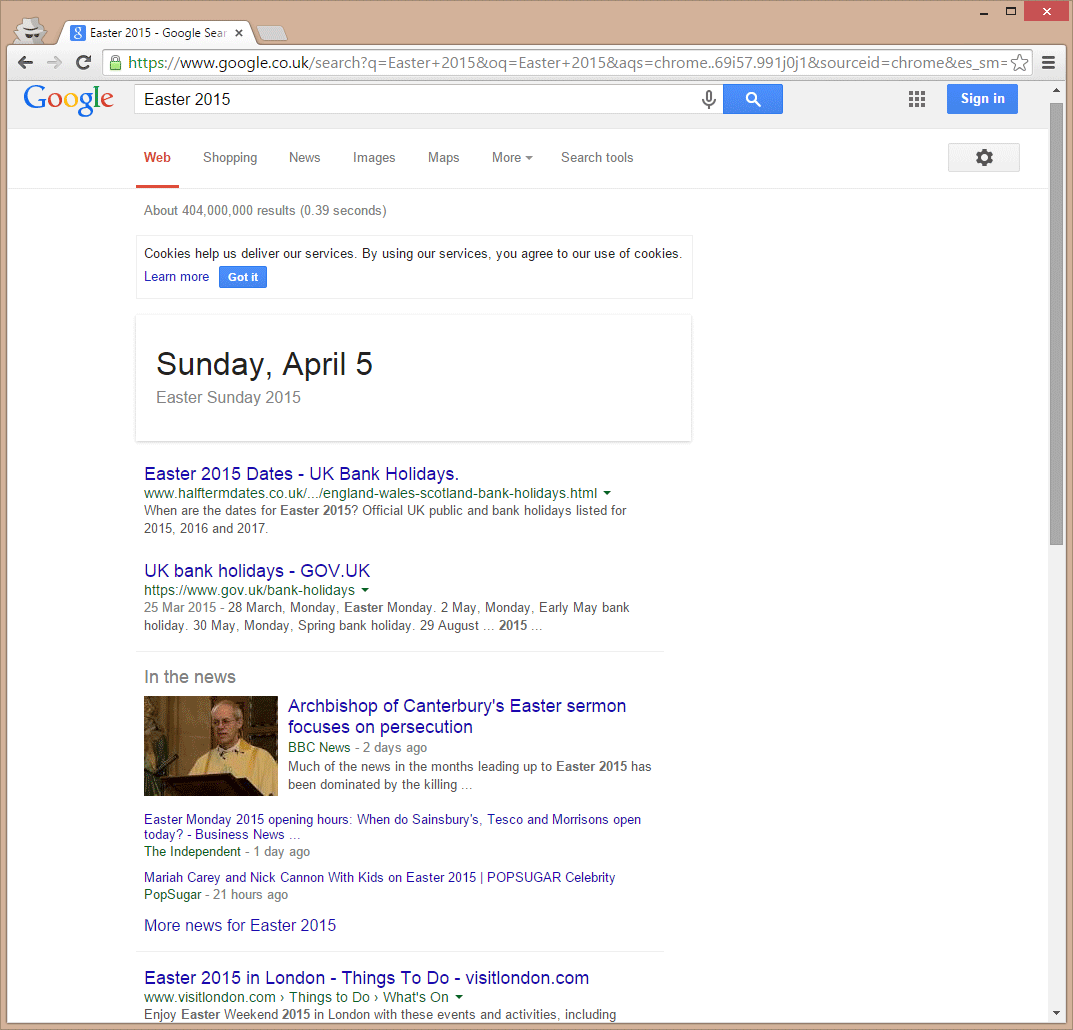 Google's algorithm found 404,000,000 results in the Google Index (this is where Google stores all the information regarding the content of webpages) related to the query and ranked them according to relevance in a mere 0.39 seconds, starting with listing the date for Easter 2015.

What Is The Algorithm?

Nobody knows how Google's algorithm is structured because people would use the exact formula to try and improve their rankings.

Google constantly updates its algorithm, and some changes are much bigger than others. Each update is different and is subject to extensive research and rigorous trials by Google's engineers before being launched to the general public. This is an enormous behind the scenes process and one that is constantly evolving as Google constantly adds to its criteria on how to rank a page, it does however stay maintained a top secret! If the formula was made available to the public, it would render Google useless as in theory every website would be able to use the formula to rank in top position.

So Google Doesn't Release Their Algorithm – What's Rumored To Be In It?

When the Googlebot crawls your website, it navigates its way around via links; they also make a list of any other links they come across. The more quality links a page has, the more important Google will consider the website, therefore moving it higher up in the rankings. Quality, not quantity is the key here: 1 link from the BBC is better than 1,000 links for a directory nobody has ever heard of. Google have recently stated that if you don't know what you're doing with link building, don't do it at all, as it will cause more harm than good.

Google will consider how relevant your onsite content is, depending on the query - writing good quality, relevant content is vital to the success of your rankings.

Google provides some information on what it considers helpful for a website to be ranked. This can all be found under Google's Webmaster guidelines.

How Often Does Google Update Their Algorithm?

Constantly! Over 300 times a year or more, there are many incremental updates that most people don't notice that take place almost daily. However, Google will also release bigger updates to their algorithm a few times a year. These larger updates often have an effect on thousands of search results and are well documented online and in the SEO community. Some of the more well known updates that you may have heard of have been called Panda, Penguin and Pigeon.

Google's Panda and Penguin updates have had a huge impact on the world of the web. The aim of these updates (the first versions were released in 2011 and 2012), was to try and reduce the number of websites that violated Google's Webmaster Guidelines, in order to climb the rankings. It was an attempt to decrease the use of Black Hat SEO techniques. Google's Panda is currently on version 4.1 and Penguin has been updated to version 3.0. Another significant update was Pigeon, launched in July 2014 in the U.S, Google officially announced its launch stating that this new algorithm was to improve their distance and location ranking criteria, therefore providing more relevant and accurate search results.

Google has announced to the public the release of its new mobile friendly algorithm update on  21st April 2015, also known as “Mobilegeddon”. This is expected to have a massive impact on search engine results, and will definitely affect those websites that are not optimised for mobile. Web pages that are not mobile friendly will be removed from all Google searches performed from mobile and tablet devices.

Google's Algorithm & Constant Updates Are Why You Need SEO

According to Google, the web is made up of over 60 trillion pages so trying to move up in Google's rankings is a very competitive game. This is where good SEO comes in, with time and hard work, your results will improve. If you need any more information regarding Google's mobile friendly update, or would like some advice for your website then our professional SEO team would be happy to help.